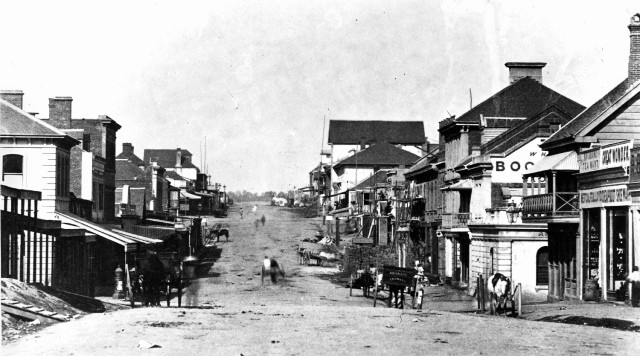 In 1865 Devon born Charles Street was 42 when he and his wife Elizabeth (nee Stanton) boarded the Flying Cloud  bound for Brisbane. He had spent the previous 20 years in America. Initially employed there as a clerk, by the time the 1860 US census was taken he had obviously prospered, his profession being described as ‘Merchant’.

He was a self-funded migrant, travelling saloon class, and on arrival was eligible for government land orders for himself, his wife and accompanying children. They had a comfortable passage and settled in Brisbane on arrival where he opened his drapery business in Queens Street. He used his land orders towards the purchase a number of large blocks of land at (what would become) Taringa and Indooroopilly, and further out at Cecil Plains on the Darling Downs. The Street family home was on North Quay.

His merchandising skills, developed in New York, were put to an immediate test.  The fledgling Colony was struggling with not only the vagaries of nature but also the world wide ‘credit squeeze’ arising largely from the policies of UK banks in their international dealings. His fellow Queen Street traders had the added burden of still being in the process of recovery from the devastating 1864 fire which burnt many of them out.

As with a number of his contemporaries Charles was eventually forced into insolvency, and whilst he eventually paid off his creditors, it was necessary to reinvent himself, initially as a ‘co-operative’ and later as a mining and land agent.

Historian and author Janet Spillman’s paper Charles Street, a shopkeeper of nineteenth century Brisbane formed the basis for her joint presentation with Ron Hamer and Andrew Darbyshire to the November 2018 meeting of the Indooroopilly & District Historical Society.

This paper should be read in conjunction with Ron Hamer’s Dreams, Hopes and Burnt Fingers which follows the subdivision process of one of the blocks of land Charles Street was forced to forfeit,  Portion 683, Parish of Indooroopilly, County of Stanley